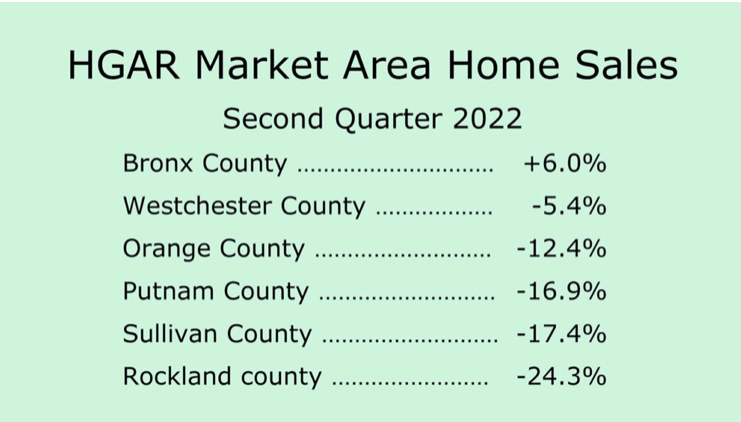 HGAR President Anthony Domathoti said that the Federal Reserve’s push to raise rates to control inflation has impacted the overall market. Domathoti, who is Broker/Owner of EXIT Realty Premium in the Bronx, said that some first-time homebuyers are being priced out of the market.

He also noted that contract retractions are on the rise because buyers monthly payments have increased to unaffordable levels. Domathoti advised buyers to persevere and that conditions will eventually return to a more normal market.

When asked about why the Bronx is outperforming neighboring suburban markets, Domathoti said, “The Bronx is literally on fire,” noting that foreign investment has fueled the strong sales activity in the Bronx and he doesn’t see any major let-up going forward.

Joseph Rand, chief creative officer and managing partner at Howard Hanna | Rand Realty, said the second quarter homes sales numbers in the Hudson Valley “tell a clear story of a seller’s market cooling, chilled by a surge in interest rates and increasingly skeptical buyers scared off by what two years of double-digit appreciation have done to pricing in the region.”

Rand echoed sentiments by OneKey MLS that the current market is still strong, and is comparable to the sales volume posted in 2018 and 2019.

“The seller’s market might be fading, but that doesn’t mean we’re going to see an immediate shift to a buyer’s market,” Rand noted. “Indeed, we see several signs that the market might just be returning to a more normal, balanced state following an abnormally large two-year tidal wave of activity following the end of lockdown restrictions, a surge in pandemic-driven urban to suburban migration and the desire to lock in what were at the time historically-low interest rates.”

In terms of where he sees the home sales market going forward, he expects activity will track near 2019 levels. “As for prices, we believe that we won’t see double-digit price appreciation again this year, but expect that low inventory will continue to drive meaningful price increases through the rest of the year and into 2023,” Rand predicts.

Houlihan Lawrence in its second quarter reports pointed to low inventory as a key issue in the current market.

“The supply and demand ratio at every price point has remained unsustainably high for several years. Inventory levels are expected to rise slowly, but right now remain historically low. Paired with current demand, prices should endure. Uncertainty in the economy, however, has caused buyers to be more cautious and discerning. As a result, sellers will have to pay close attention to pricing,” said Liz Nunan, president and CEO of Houlihan Lawrence.

The region’s luxury market has slowed as well and a closer look indicates that rising rates are having an impact, according to Houlihan Lawrence.

“Rising mortgage rates impact the decision to stay or move. The luxury buyer has the resources to absorb higher payments, however many would-be buyers who recently refinanced or purchased at a 3% mortgage are reluctant to trade their existing home and assume a significantly higher mortgage on a new purchase. Should their desire for a new home be stronger than practical implications, many don’t want to compete in such a supply-constrained market,” said Anthony P. Cutugno, senior vice president and director of private brokerage for Houlihan Lawrence.

He added that there are other factors that are causing some luxury buyers to stay on the sidelines at the moment. “Most new buyers want to put their personal mark on a new home, but material delays, supply chain issues and labor shortages keep homeowners out of the market,” Cutugno noted. “Low supply translates into competition, and sellers still have the upper hand. However, a sense of discipline has returned to the market as buyers contend with rising interest rates, stock market volatility and record high inflation.”–

“There will continue to be challenges in comparing sales numbers to the pandemic year of 2020, when the market came to a grinding halt in the second quarter, and the post pandemic market of 2021, when pent up demand drastically sped up typical buying cycles. In conclusion, one has to believe that the significant head winds of a declining stock market, rising inflation, rising interest rates, and the threat of a recession will continue to take their toll on the housing market. However, continued strong buyer demand, low inventory, and a strong labor market appear to be mitigating factors. Also, there have not been any significant price corrections given the current economic headwinds. Depending upon the length and depth of a recession (if there is one), the lower Hudson River Valley and greater New York City Suburban real estate markets should continue to demonstrate stability going forward into 2022. So far, the housing market appears to be rising above the perfect storm.” Data provided by OneKey® MLS Hudson Gateway Association of REALTORS®